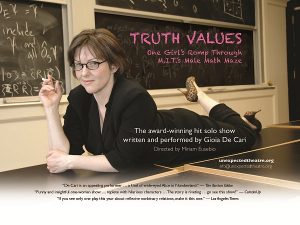 Created in response to former Harvard President Lawrence Summers’ infamous suggestion that women are less represented than men in the sciences because of innate gender differences, TRUTH VALUES is a true-life tale that offers a humorous, scathing, insightful and ultimately uplifting look at the challenges of being a professional woman in a male-dominated field. Writer/performer and “recovering mathematician” Gioia De Cari brings to life more than 30 characters in a hilarious and deeply touching performance that has earned rave reviews from critics and stirred audiences to standing ovations.

Performances on the University of Wisconsin-Madison campus will be held on Thursday, September 20 and Friday, September 21, in Mitchell Theatre. Both performances are at 7:30pm, and will be followed by panel discussions.