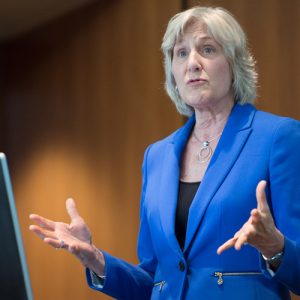 The overall goal of her research program is to develop, implement, and study interventions that ensure the opportunity for participation and advancement of talented individuals from groups that have been underrepresented in academic science, technology, engineering, mathematics, and medicine (STEMM) – particularly at the leadership levels. Using UW-Madison as a “living laboratory” for achieving STEMM workforce diversity, she employs both quantitative and qualitative methods with multi-level interventions at the individual and institutional level.

Dr. Carnes initially began conceptualizing STEMM workforce diversity issues from an epidemiological perspective (i.e., what was “killing” talented women and minority trainees and faculty off as they progressed toward the professoriate) and she has progressively moved toward an organizational change approach. For the past decade, she has been studying ways in which unconscious (implicit) assumptions about groups underrepresented in STEMM infiltrate decision-making processes and conspire unintentionally against STEMM workforce diversity. Her current research, funded by the NIH, aims to effect institutional change by promoting “bias literacy” among STEMM faculty and developing a variety of tools to help faculty “break the bias habit.”

Dr. Carnes has published over 150 articles and has received a number of awards including an NSF ADVANCE Institutional Transformation Award, an NIH Director’s Pathfinder Award for Research to Promote Scientific Workforce Diversity and an NIH Transformative R01 to Explore the Science of Scientific Review.

Dr. Carnes in the News