WISELI can typically present this workshop during the spring and summer semesters (January–August), but not during the fall semester (September–December). Please contact WISELI for more information about scheduling and hosting a workshop.

The Breaking the Bias Habit® workshops introduce academic audiences to the concepts of implicit or unconscious biases and assumptions about diverse groups of people by treating the application of such biases as a “habit,” with a focus on race, ethnicity, and gender. Participants will uncover their own biases, discover the underlying concepts and language used in the psychological and social psychological literature to describe such processes, participate in interactive discussions about the potential influence of implicit or unconscious bias in their department/unit, and learn evidence-based strategies for reducing the application of these biases. One workshop is aimed at general academic audiences, and the other is tailored specifically to academic medicine (BRIM).

Both workshops ares based upon our previous workshop that focused on gender bias and was the first randomized-controlled study of an intervention that aimed to reduce the impact of bias in academic settings. The content and some of the materials from the gender bias workshop are available in the supplementary materials to our 2012 paper, “Promoting Institutional Change Through Bias Literacy.”  See below for full reference.

Contact us for more information about the workshops, and costs for bringing the workshop to your institution. 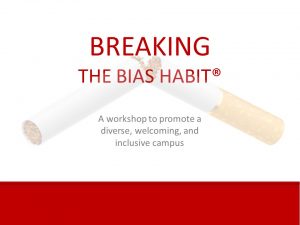 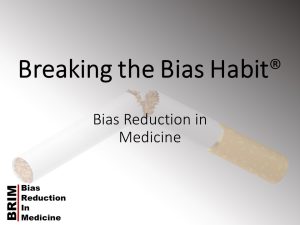 For information about scheduling a Breaking the Bias® workshop with a UW–Madison department or unit, click here.